The Stories Behind the Badge

In honor of National Police Week, we wanted to share personal connections and stories from law enforcement leaders across our state who promote a positive donation culture within their agencies. This type of leadership is incredibly important to our mission of saving and healing lives through organ, eye and tissue donation.

At Nevada Donor Network (NDN), our goal is to end the wait for the over 100,000 American who desperately wait for a life-saving organ transplant. To meet this goal, we’re always seeking new partnerships and ways to help educate our community on the importance of organ, eye and tissue donation. There are several out-of-hospital partners, such as law enforcement agencies, that choose to collaborate with Nevada Donor Network because they believe in our mission.

Trooper Ashlee Wellman is Public Information Officer (PIO) for Nevada State Police Highway Patrol. Supporting our mission is very important to her. She decided to share her ‘why’ with our online community... “I was born and raised in Las Vegas, Nevada. From a young age, I knew I loved to help others and wanted a career that would make a difference in my community. I have been in law enforcement for over ten years. Throughout my career I have responded to hundreds of traumatic and tragic scenes. I take a lot of pride in the relationships I’ve built with schools, businesses and people in our community. One thing that means a lot to me is our partnership with Nevada Donor Network. When we respond to fatal crash scenes, after a while, they begin to take a toll on you mentally and physically. Nevada Donor Network gives me almost a sense of peace and comfort knowing that the individuals who I couldn’t save that day, could still live on through others. Last year, we lost one of our own, Trooper Micah May in the line of duty and the quick actions of my brothers and sisters in blue, as well as the medical staff at University Medical Center of Southern Nevada (UMC) made it possible for his family to say goodbye, but also gave the opportunity for Micah to be a hero even after death. Trooper May gave the ultimate gift by donating four of his organs and saved the lives of three individuals. Knowing that he is going to continue to live on through others because of Nevada Donor Network is hard to find the words. It has been truly bittersweet to hear the stories and meet the families of these heroes who gave the ultimate gift. Throughout this process it has opened my eyes to how many people have been a recipient of an organ, eye or tissue donation. We are all connected in more ways than we know and that is why this partnership has become so special to me.” 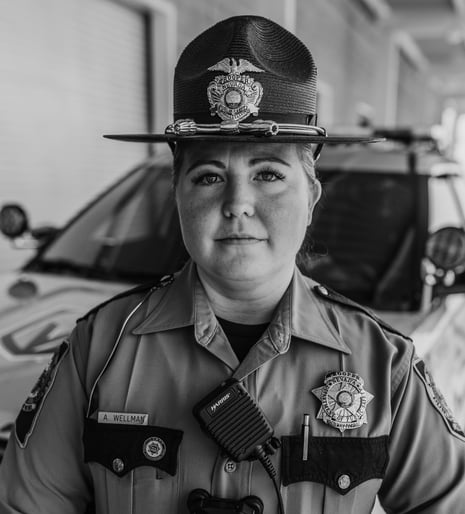 Another donation champion is Sergeant Will Lynch who works with Douglas County Sheriff’s Office. Organ donation is personal to him. He shared his family’s harrowing journey to receiving the ultimate gift... “I have been employed by Douglas County Sheriff’s Office since 1992, serving as a Deputy Sheriff in the jail, patrol and traffic divisions. I was promoted to Sergeant in 2006 and have served in the jail division, the patrol division and currently the administration division. I met my wife Monica while working in Stateline, Nevada in 1997. We married in 2000 and have a son, Jacob. Monica was diagnosed with polycystic kidney disease around 2002. Polycystic kidney disease (PKD) is an inherited disorder in which clusters of cysts develop primarily within your kidneys, causing your kidneys to enlarge, lose function over time which leads to needing a kidney transplant. Monica was placed on dialysis in July of 2019. We try to keep our family life private, but when Monica was placed on dialysis, we knew we needed to reach out to the community of the Carson Valley to find a donor. Crystal Allen, who works in our records division at the Minden main station, is a friend of Monica’s. Crystal’s husband, Bret, had just donated blood and told his wife that his blood type is “O,” the same as Monica’s. Monica contacted her case manager at the California Pacific Medical Center (CPMC) Van Ness Campus, who in turn reached out the Bret and Crystal to see if they were interested in testing for a possible kidney transplant. In the meantime, Monica had her left kidney removed due to pain in December of 2020. Over the next several months, Bret and Crystal traveled to CPMC for testing. We learned a short time later that Bret’s kidney was a match for Monica and surgery was scheduled for November of 2021, then rescheduled for the end of December 2021. A snowstorm hit the mountains and all roads were closed due to the amount of snow making it impossible to travel to Northern California. Through teamwork, Monica and Bret were able to fly privately from Reno to Oakland, then Uber to San Francisco to make the surgery date. Crystal and I drove over the mountains the following day while Monica and Bret were in surgery. They were both released from the hospital later that week and were able to travel home to recover from surgery. Douglas County Sheriff’s Office is extremely grateful to Bret for his courage and heroism by donating his kidney to Monica.” 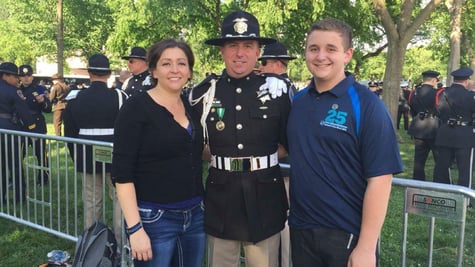 Many organ procurement organizations (OPOs) like NDN don’t have these types of relationships with law enforcement agencies in their state to further their reach. This high level of cooperation and collaboration is so unique that it has been recognized with several national awards. We can use these existing partnerships to extend our impact across the state, therefore maximizing support for our mission in a meaningful way.

Inspired by their support? Register to be a hero today!